The Sutardja Center for Entrepreneurship & Technology (SCET) at UC Berkeley is excited to celebrate SCET instructor and executive scholar, Shuo Chen, who was just named to Forbes’ prestigious 30 under 30 list for 2022 in the venture capital category.

Shuo is a new instructor at UC Berkeley SCET College of Engineering and a faculty member at Singularity University since 2010. She is currently teaching the Challenge Lab: Education, Technology & Entrepreneurship this fall. Shuo is also the chair of the Board of DECODE, a student-run innovation community co-hosted by UC Berkeley and Stanford. Many Berkeley SCET students attended their annual conference on Nov 6 & 7th at Stanford and Berkeley, an event featuring the founder of Gradescope and Snackpass, among many other reputational entrepreneurs, or attended the decal course Decode Silicon Valley Startup Success where Shuo also lectures.

Shuo is a General Partner at IOVC, focusing on early-stage venture investment in the future of work and enterprise/SaaS. Impressively, she is appointed by California Governor Gavin Newsom to serve as one of 13 voting members on California’s Mental Health Commission and also is the first Asian American Commissioner. In this role, she helps oversee about $2.6 billion annually on the state budget.

In her venture role, Shuo had invested in companies that were now acquired by Goldman Sachs, Ford, Binance, and Caterpillar, as well as unicorns including but not limited to Instacart, Boom, Grubmarket. She also helped portfolio companies to close deals with Amazon, Apple, Google, Mercedes-Benz, NASA and many others.

As if her experiences are not impressive enough, in 2019, Shuo co-authored a book on financial regulations called The Political Economy of Financial Regulation, where she wrote The Information Gap between Institutional and Retail Investors during the IPO Process that was published by ​​the Cambridge University Press.

Previously, Shuo worked at Goldman Sachs and PwC. During her years working at Goldman Sachs in investment banking, she worked with world-known clients including Alibaba and Tencent, as well as representing the firm on the Board of Women in finance. Prior to that, Shuo worked at PwC, where she handled Google’s $12.5 billion acquisition of Motorola and LinkedIn’s $119 million acquisition of Slideshare. Shuo also sits on the Advisory Board of Forbes China and advises on content for Asian Americans in North America.

Christine Dauchez, the managing counsel at Mckinsey posted on Linkedin to Shuo: “Congrats, Shuo! You seem to have your hand in everything and yet still find time for everyone. With gratitude and best wishes for your continued success,” which speaks out the aspirations for many of us.

A huge congratulations to Shuo! 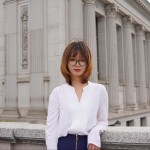